Despite a plethora of franchise reboots occurring over the last decade, one that has always stood the test of time is James Bond. Whether due to the presence of fancy cars and gadgets, formulaic villains, or just the British accents, the franchise continues to consistently attract American audiences.

With Spectre, the twenty-fifth installment of the franchise, due to be released to audiences everywhere this Friday, Daniel Craig has signaled that this will be the last time he dons the tuxedo. The movie has been screening well and experts anticipate a huge box office haul, but as his era draws to a close, where does he stand compared to his counterparts?

Although the story lines themselves have not evolved much over time, the quality of the movies and their box office successes have largely depended on the Bond at the time. A strong example of this is Timothy Dalton’s failed run as 007. His time was cut short due to mediocre reviews and a box office average of only $91 million per movie, after being adjusted for inflation. These meager results are a far cry from the $219 million franchise average.

The below table depicts both the average IMDB score as well as the box office totals, in 2015 dollars, for each star. Based on these metrics, an argument can be made that Craig was the best in the line of super spies.

There is a clear separation between Craig and Connery in comparison to the other five actors. In terms of their career trajectory, what stands out is the rise and fall of Connery over the course of his seven movies. More specifically, Connery was at his peak during his third and fourth installments, Goldfinger and Thunderball, but then drastically underachieved in his last three films. Goldfinger and Thunderball accounted for nearly $1.2 billion dollars, which is more than Connery’s five other Bond movies combined. Although his longevity should be noted, the decline towards the end of Connery’s career on both metrics is significant.

To that end, an interesting pattern emerges once you look at a similar progression of films by other Bond leads over time. The figure below illustrates the aggregate change in movie rating and box office performance, for all actors starring in more than two movies, excluding Daniel Craig. 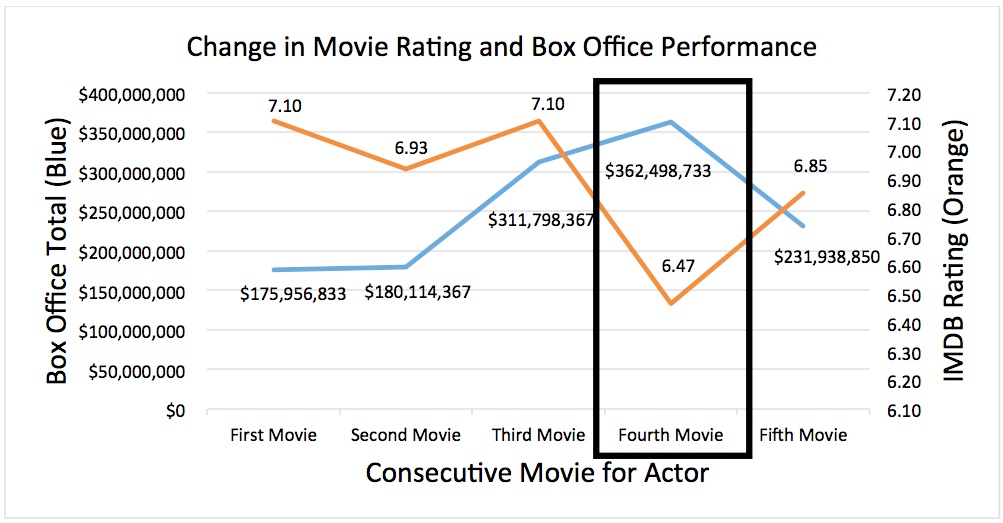 Based on this analysis, it appears Daniel Craig is jumping ship at the right time. His movies have increased in box office revenue over time, but this is closely mirrored by each movie’s IMDB rating. Spectre should be due for a huge box office opening weekend and with positive reviews, it is forecasted to best Craig’s penultimate movie, Skyfall.

A final interesting note regarding Craig’s run is the variance in quality of his movies. He has been a part of two of the three highest rated Bond films of all time – Casino Royale and Skyfall – but was also featured in the relative flop Quantum of Solace, which scored an IMDB rating of 6.7. With Spectre boasting another rating above 7.5, Solace will likely be viewed as an outlier used to transition the storyline across movies.

Ultimately, Connery created the mold for the series and if not for his stellar performances in the beginning, there would not be an infrastructure for any of the actors to improve upon. That being said, if Craig can capitalize on the same fourth-movie bump as his predecessors, he will cement his status as the best Bond of all time.