Imagine being locked in a room for exactly one hour…now imagine you’re there with five strangers….and to top it off, the success of your escape depends on solving puzzles.

If you can imagine all that, then you know what twenty-one members of the MSA Class of 17 went through during the Escape Room social outing.  The members gathered at Bull City Escape in Durham and split into three teams to enter three themed rooms.  One team was stuck in a giant 90s flashback, one team had to solve a murder, and the third team crash landed on the moon.

Teams worked together in a tense environment to solve puzzles, crack codes, and follow sequential clues, which ultimately led to a numerical combination to open the door.  As you might expect, with the quality of students the MSA program attracts, each group was able to escape their room within the allotted time (though the Lunar Lockdown team was the fastest of the three). 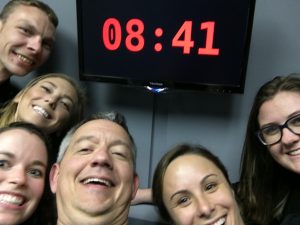 It was a great time and a great way to get to know each other.  Many of the students who couldn’t attend have already requested another outing, so keep an eye out!  Another escape may be in your future.