Now that the Rio Olympics have come to a close and the athletes have departed the Olympic Village, one question that might be on peoples’ minds is: Which nation was the winner of the games? At first glance, the obvious answer to this question is the United States. No other country even came close to the U.S. in terms of number of gold medals (46) or total number of medals earned (121). However, might there be other interesting ways to consider which countries were most successful in this year’s Olympic games? Let us investigate.

Countries like the U.S., China, and Russia have a clear advantage in the Olympics, because they have large populations to draw athletes from. These three countries combined had 1,254 athletes participate in the games, around 11% of the total. Although smaller nations might be particularly strong in one or two events, it is extremely unlikely that they’d be able to produce the same breadth of talent as their more populous peers. That being said, were there any nations whose medal counts are over-indexed in relation to their size? It turns out that there were.

Looking at the average number of medals earned by a nation’s athletes, the U.S. (.22 medals per athlete) comes in fourth place behind Azerbaijan (.32), North Korea (.23), and Kuwait (0.23). For gold medals specifically, the U.S. (.08 gold medals per athlete) slipped to seventh! However, it should be noted that Jamaica was the only nation in front of the U.S. that had more than 15 athletes competing.

Calculating athletes per capita, you can see that the list is dominated by several small island nations like the Cook Islands, Palau, and Nauru. But perhaps this isn’t as interesting to us, because the raw number of athletes for these countries was quite small, and it also doesn’t tell us anything about how these athletes actually performed. Certain Olympic events allow any country to enter an athlete, even if he or she did not meet the qualifying standards, so number of athletes may not make sense as a metric to judge success.

Perhaps the analysis that penalizes the U.S. most is ranking nations by number of medals per capita. With just 0.38 medals per American, the U.S. ranks 44th in this category! And even if you remove any nation with a population of less than one million, the U.S. still doesn’t crack the top 15. Jamaica, a nation with a population of just 2.7 million, won 11 medals (all in Track & Field). 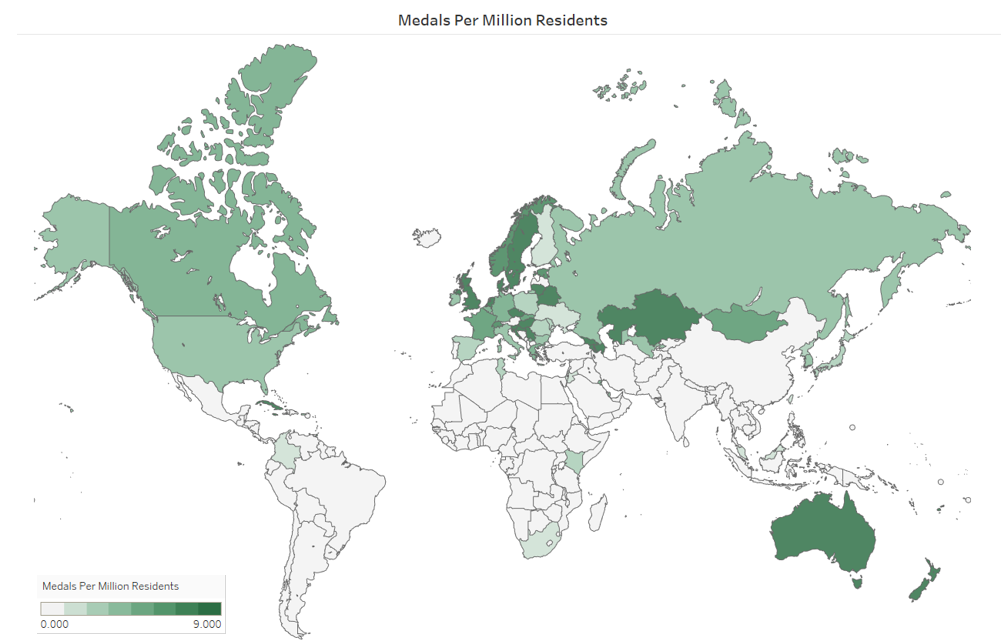 Evidently, there are several ways to judge a nation’s success in the Olympic games beyond just looking at medal counts. And regardless of which country comes away with the most hardware, we should remember that “the important thing is not to win, but to take part” (Pierre de Coubertin). I’m already counting down to Tokyo 2020!