This is the year. Your team had a nice draft, last year’s rookies showed improvement, and you may have even picked up a free agent or two. Expectations are through the roof. Your team should contend for the Super Bowl, or at least make the playoffs. Well, unless you’re a Lions fan. Years of losing has taught us better.

But the NFL is a zero-sum game: One team’s improvement is another team’s loss. While fans may ignore this inconvenient truth, data does not.  So, before you get that Super Bowl tattoo, let’s see what the data says.

The projected win totals listed below are based on an Ordinary Least Squares (OLS) regression of Madden ratings from the previous five seasons. When tested on last year’s NFL standings, the model produced a root mean square error (RMSE) of 2.5, which is considerably more accurate than FiveThirtyEight (2.94) and USAToday’s (3.16) 2016 pre-season predictions. 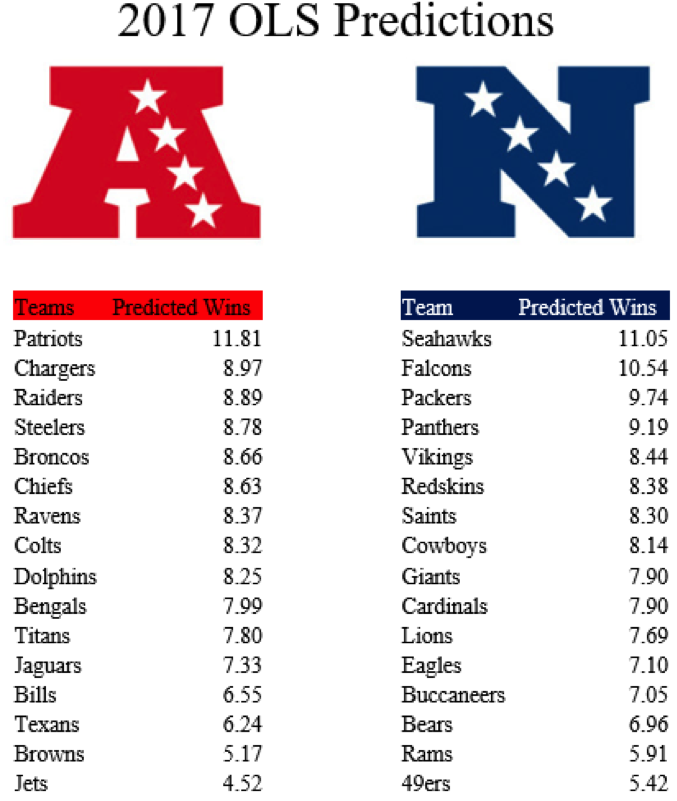 Unfortunately, the OLS model cannot account for the inevitable season altering injuries. To account for these changes, the dashboard below provides updated week-by-week predictions. These predictions are based on a combination of logistic regressions and simulations that account for Madden ratings, injuries, and teams’ point differentials. With respective RMSEs of .467 and .47, the model below is slightly better than FiveThirtyEight’s 2016 game predictions.

Click the dashboard below to see the following information:

Interesting tidbits from this model include:

The OLS and logistic regression techniques used for these models were both learned during the Summer II semester. Given the more advanced tools to come in the Fall and Spring terms, chances are high that the model will be more accurate next year. If nothing else, the model’s prospects are better than my Lion’s Super Bowl chances. But then again, maybe next season will the be the year. A fan can hope, right?