I graduated with a degree in political science and a minor in philosophy. My first job out of school was as a Community Relations Coordinator at an accounting firm here in Raleigh, NC. I enjoyed the work but knew it was not my passion. I was interested in data analytics but assumed that only students who have a mathematical foundation could enter the profession. Accepting a political science major to a STEM graduate program sounded as crazy as hiring a politician to oversee the data analytics for SpaceX.

Then I heard about the Institute for Advanced Analytics at NC State. I learned that former students had studied subjects as diverse as drama, art history, political science, psychology, and more. Many students had STEM backgrounds, but it was incredible to see that others without STEM backgrounds had also been successful.

Though I was excited about a career path that would allow me to work with big data while learning valuable and rewarding technical skills, I needed to ensure that the ROI would be good enough to pursue an MSA. I had student loan debt and did not want to stack on more without working through the numbers (very analytical thinking). So, I looked at salary averages from The Wall Street Journal and explored them to better understand if a career in STEM would be able to pay me enough to come out of the hole of debt I would be digging.

I used Python to clean up the dataset so it was easier for me to work with. I renamed the columns, changed the data types from strings to integers, and added my own column that categorizes each major by one of the five types: STEM, Social Science, Science, Arts, and Business. To display some of the simple edits I made, I have included the top five rows of the old and newly edited data frame.

Figure 1: Dataset Prior to Editing

As a political science major, I wanted to look at those data first and see where my starting salary lined up. To do so, I isolated the row containing the data for Political Science.

Money is not the most important variable for me, but I needed to see if I would be making a smart investment. To do that, I looked at the undergraduate degree salaries to get a better feel for salary by major. I used $80,000 to break up the data because it is around the mid-career median salary for political science majors. Then, I looked at major types that made over $100,000 for median mid-career salary to see if STEM majors are up there. In the dataset, there are 50 total majors. Of those 50, only 4 majors earn a median mid-career salary over $100,000, and they’re all in STEM.

To get a visual look at the data, I used Python to create the boxplots shown below. 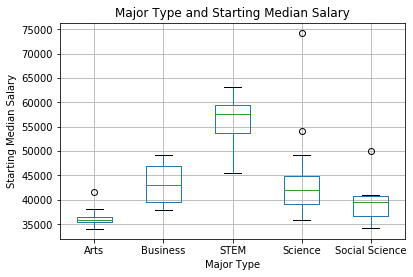 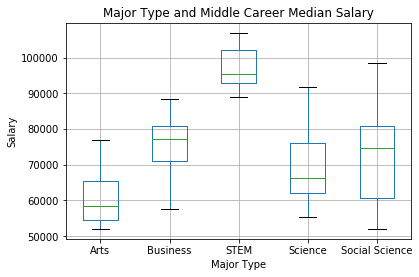 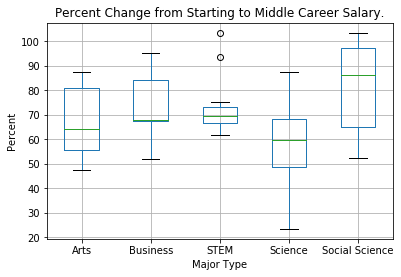 According to these findings, STEM careers do outperform other majors, on average, when it comes to salary payment. The mid-career median salary for STEM degrees is around $95,000 annually. The average starting salary for graduates from the IAA is around $95,000. Pursuing an MSA degree at the IAA has the potential to provide me with the skills I need to do what I am passionate about while hopefully increasing my salary, allowing me to pay back loans at a reasonable pace. This showed me that despite not having a STEM background, getting my MSA would likely be worth the commitment and investment.

Some of you reading this may be prospective students who never studied math or stats in college. You might be wondering, “Is this a field I can jump into, learn core skills, and mesh them with my unique background?” My answer: absolutely! Of course, there is a learning curve for those of us who do not have a math or stats background. Learning linear algebra, linear regression techniques, modeling techniques, and coding with software when you have either never touched any of it, or it has been a few years, is challenging. However, if you are thinking about applying to the MSA program, I can say that having a background outside of STEM might not be a disadvantage, but rather your ticket in. My time spent studying politics and philosophy helped me hone my skills in emotional intelligence, critical thinking, personal communication, public speaking, and writing, all of which will be useful to me during my time at the IAA and beyond.

Data Science is one of the most exciting industries to be a part of right now. It takes talent from a diverse group of people to continue making strides in the field. If you do not have a math background, or even if you do, and are looking for an exciting STEM field you can jump into and potentially make a good living, Data Science could be right for you. Good luck!