The Institute’s admissions team regularly receives inquiries from prospective students along the lines of: “I’m interested in the MSA program, but I’m a ________ major. Do I even have a chance of being admitted?” One can fill in that blank with any number of disciplines — psychology, chemistry, political science — and the answer is always, “Yes, you have a chance.”

Over the next several months, we will shine a spotlight on alumni with diverse academic and professional backgrounds to reveal how the interdisciplinary lens through which they view the world aided them in the MSA program and beyond. 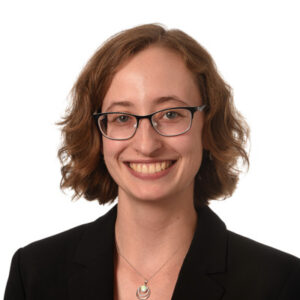 Abigail McCauley, née Dexter-Boone, is one such alumna. A Kansas native, McCauley completed back-to-back bachelor’s and master’s degrees in plant biology and crop science at NC State and was deeply involved in research. As she articulated in her application for admission to the MSA program, this research experience showed her that “the true power and promise of plant breeding derives from working with data sets that are sufficiently large to generate accurate and meaningful results.”

As an MSA student, McCauley had the opportunity to apply data analytics techniques to problems entirely different from those she’d encountered when studying soybean and tobacco genotypes. For example, she and four teammates tackled a practicum project sponsored by Trillium Health Resources, a local governmental agency that manages mental health, substance use, and intellectual and developmental disability services in eastern North Carolina. Since completing the MSA, McCauley has worked as a project lead at Syngenta in nearby Research Triangle Park. We spoke with her recently about her experiences.

How did you become interested in data science and analytics?

I became interested in analytics because it is critical to the science field I wanted to work in: plant breeding. I started taking stats classes in my sophomore year of college and continued building my knowledge over the course of my BS and first MS. After taking a handful of stats classes, I realized it was the data analysis part of agricultural research that I loved the most and wanted to pursue further and applied to the Institute. The plan was always to merge data science with my previous degrees and experiences that were focused on plant breeding and genetics. My current role would not have been possible without this fusion of the science background and analytics.

Do you think your natural sciences background benefitted you during your MSA studies?

It was absolutely beneficial. Because so much of my science background was based on data analysis, I already had a statistics foundation. I feel like it also helped give me a deeper understanding of some analysis methods because I had worked in research for a few years and some foundational topics, especially of experimental design, started to become second nature.

Given your non-technical major, was there anything you wished you would have known, or done, before beginning the program that could have helped you prepare?

The biggest area I struggled in was data wrangling in R and Python. In my previous research, a lot of data cleaning and such happened in Excel because datasets were not very big. That was how I was checking data during my previous MS — then I got to the Institute and realized the tools and methods I had relied on before were limited by sizes of data. I wished I had tried more of that work in R before I needed to.

Can you tell us about the work you are doing now in the field?

I currently work as an applied genetics scientist. It is a great blend of agricultural science and analytics. I couldn’t work in my current role without both my natural science degrees and my analytics degree.

What is the greatest highlight of your time as an MSA student?

The practicum. It gave me a lot of confidence in my work to realize that I could use some of the same practices from my previous research experiences in a different field. I always saw myself as a specialist, and it gave me the realization that I could do more beyond that, and that I didn’t necessarily need to narrow my field to have an impact.

What advice would you give to other students from non-technical backgrounds interested in the MSA program?

Data analysis is a critical part of the natural sciences, and being in a position where I could combine a degree in crop science with a degree in analytics made my education a lot more valuable and marketable. I didn’t go into the program as technically strong as some of the other students, but I had an understanding of my field of interest that allows me to really target analytics in specific ways that provide a lot of value. A degree in data analysis does not always mean that you are going to be the best programmer in the room or the person with the strongest stats theory background, but it gives you a perspective that is critical and highly valued in many fields.