I love to laugh. I love making people laugh. Although I trust in science, I still think laughter is the best medicine. Stand-up comedy is one of my favorite ways to laugh. It does not matter what type of person is up on the stage telling jokes as long as the jokes are funny, right? Well, yes and no. Like in many male-dominated aspects of society, women are discriminated against based on gender.

When analyzing data from Comedy Central Presents, a TV show that brings on different comedians to perform stand-up comedy, I found a significant difference between episode ratings between male and female comedians. This blog post will explore the data and draw connections to women in comedy in an attempt to explain this difference.

After some time looking around, I found the Comedy Central Presents data on “data.world.” It had 283 observations (one per episode), 10 variables, and represented episodes from 1998 to 2011. The variables of interest were the airdate of the show, the comedian’s gender (which I added manually), and the rating score of the episode (0 to 10, higher the better). 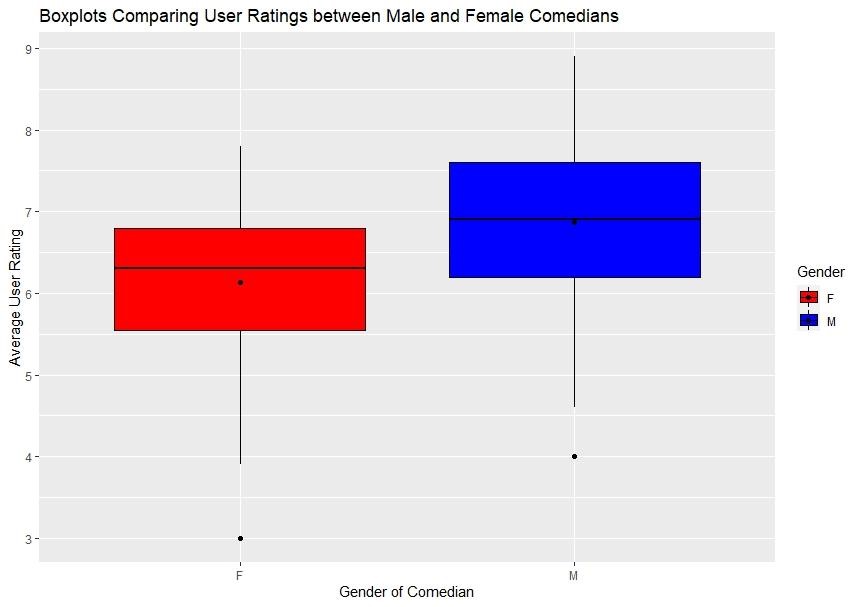 According to Ayesha Hazarika in a 2017 article in The Guardian, humor can be “very powerful as it shows confidence and intelligence – and in our culture, that is still the male role.” The social norms around comedy may have led audiences to be put off by confident and intelligent female comedians, possibly resulting in lower ratings. But social norms change over time. Does this dataset show any signs of change?

Changes in Gender Differences Over Time

As we can see, the more recent episodes have a smaller difference in ratings between male and female comedians than the earlier episodes. While the difference in ratings has changed over the 2 time periods, it was not significant. A potential reason for the insignificance of this pattern is that Comedy Central Presents was losing popularity overall. The average male ratings seemed to decrease from Group 1 to Group 2, but the female ratings stayed relatively constant/only showed a slight increase. The following bar chart visualizes the previous idea. The x-axis represents the time group, and the y-axis represents the average rating. 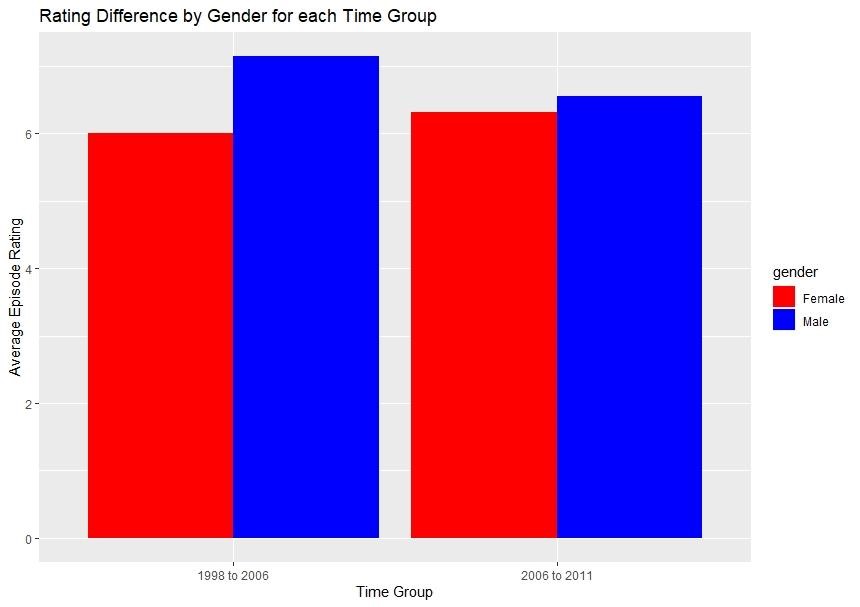 Based on my analysis, comedians are viewed differently when it comes to gender. This unequal view is present in other aspects of life as well, but things are changing for the better. More women are entering male-dominated disciplines like STEM, and the same can be said about comedy. This growth is a good thing, as over time, humor can transcend these stereotypical and superficial boundaries to provide relatable commentary from a variety of perspectives.

Hazarika believes that “People are funny. These funny people can be men or they can be women or neither. They can be gay or straight or somewhere in between. They can be tall, small, fat, thin, standing up or sitting down, bearded, bald, black, brown, beige, yellow, ginger, and of course white. Funny people come in all the glorious shapes, sizes, and flavors that human life has to offer.”

Chelsea Perretti, Iliza Shlesinger, and Michelle Beautau. These people are funny (in my opinion at least). If you are interested in diving into the world of stand-up comedy, I would recommend checking out their specials on Netflix.